Lately, I’ve noticed a number of LinkedIn members committing, what I consider to be, a most heinous and egregious “sin” when it comes to forum decorum- or just basic manners- in the forum groups. They do, what is referred to as, “hijacking a thread”.

When a group member takes the time to create a post, or ask a question in the group, the purpose of that thread is to initiate a discussion on that topic, shares thoughts and comments, or provide answers if the post is an actual question. The purpose of these exchanges is to get people involved in the group, to learn and/or teach, and to make the group far more interesting than a “post board” where people promote themselves and their businesses or projects.

Unfortunately, there is this ongoing habit with some very rude, ill-mannered and disrespectful group members who feel the need to “hijack” a thread, usually by promoting their book or project of some sort, on a thread that has no substantive relationship to their post. They believe it will MAXIMIZE views on their project because the thread is very active with responses.

However, the exact opposite is true.

Within minutes, their post will be so buried, you’ll need an archeological dig to retrieve it. In addition, you’ve just pissed off a whole lot of people that are involved in the thread- including the group moderator or owner- and it will result in you being moderated from this point forward or banned from the group altogether.

These hijacking have been going on for a while, and it’s not new, but I had two recent instances of this very thing on the same thread, and in the same group! Ironically, it was a thread about techniques in networking through LinkedIn. Not only did these two people obviously not READ the article, but they did one of the more damaging things to their reputations and networking strategies by hijacking the thread. The group was “Film and TV Tech” group, of which I’ve been a contributor for years with various postings regarding filmmaking, production and screenwriting.

The first hijack was perpetrated by a gentleman named “Kolawole” from Nigeria. I contacted him, and he promised to remove his post on the same thread, promoting his “talent agency”. The next day, the post remained. I reminded him that he said he would remove it and he responded that he had, but it must have been from another thread (apparently, he’s doing this a lot). I provided a link to the thread and will wait another day, but I believe he will make the attempt to remove it, or at least I hope so.

The second hijacker was “Mark”- a sci-fi “author”; you’ll see why I used the quotes shortly. I contacted him after seeing his post publicizing some book he apparently wrote, and asked him- politely- to remove the post because it had nothing to do with the conversation. I also suggested that he start his OWN thread about his book, as no one will ever really see it on this thread (maybe 10 people?). He responded with an apology and a promise that he’d fix it when he got home.

The next day, the post remained, so I contacted him a second time. He responded that he thought my request was just a “suggestion”. The fact that he promised to take care of it meant absolutely nothing, as he clearly had no intention of changing it.

I pointed that very fact out to him, and this was his response:

“Apparently you have to much time on your hands. First Grow the F#$* Up. Are you Stupid or what? Or don’t you know that Everybody on LinkedIn is On here Too PROMOTE Their Selves and PRODUCTS! Duh .. Ass Whole, remove it yourself,. However you see Fit D!ck Face!”

(The message WAS cleaned up some for posting purposes). 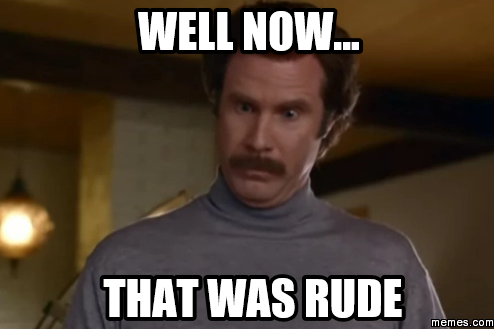 Now, keep in mind- this person is an “author”. I think one can easily tell by his writing skills just how successful a self-published author he is. More importantly, this comment, and the previous responses, shows this to be a purposeful act, not accidental, as originally thought. It wasn’t even the case of a newbie not knowing any better. He just didn’t care.

These thread hijackings are very troublesome and need to be closely moderated by the group owner or moderators. I own and moderate four groups of my own, and while it is a lot of work, it’s well-worth it. The members see how much better a group forum is when moderated closely. Our discussions can run 30-40-50 comments without interruption. Most of the information is either brand new to the members, or timely reminders on strategies, screenwriting, networking, etc. The feedback from these groups is 100% positive.

In other groups, where these hijackings and random self-promotions are more common, the commentary rarely goes beyond the initial post, when another thread starts- and stops, and then another post, and on and on. Pretty soon, a question posted that morning is now dozens of posts deep, never to be seen or read again.

I ask that people using these group forums be respectful of other people’s threads, and don’t use these forums so much as a tool for self-promotion. That is what your daily updates are for. I also request that moderators and owners take more personal interest in managing these forums to prevent these hijackings and you’ll see a much more involved group on your discussions board.